Some Questions with Derek Grimes of Paradigm Playing Cards

Designed by Derek Grimes and produced by Murphy's Magic, Paradigm Playing Cards is a unique deck crafted for both magicians and cardists in mind. A Paradigm is a standard, perspective, or set of ideas- a way of looking at something. Derek set out to do just that, and after a year in the making, Paradigm is a deck which you could begin by showing the slickest packet cut off, then right after do an Ambitious Card routine! With pretty standardized Pips and indices and standard reimagined Courts, this deck is sure to not raise any suspicion.Prior to the release of the deck last week, we had a chat with Derek about his design background, inspiration, and design process behind the Paradigm Playing Cards. 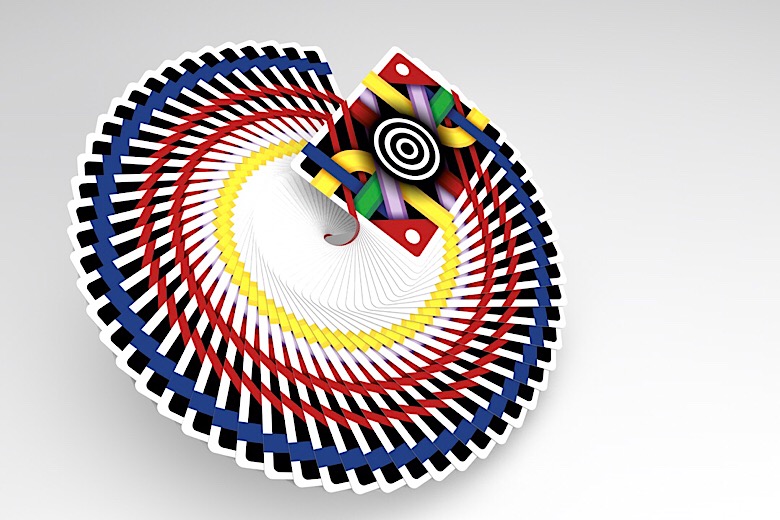 For those of us who don’t know, can you tell us about yourself and what is your design background?My name is Derek Grimes and I'm 35 years old. I currently run a YouTube channel called Disfunkshinal Reviews, where I review playing cards and magic releases. I’ve been doing that for a year and a half. I’ve been into magic since I was 11 years old when I went to see David Copperfield live on his “Forces Unseen” tour. As far as my design background, I am very artistic. Always drawing, tattooing, and more! I went to school for graphic art and design about ten years ago to become a freelance digital artist and ended up dropping out 6 months in, do too bad financial reasons.Can you describe the Paradigm Playing Cards and why you’re passionate about it?I started working on this deck a little over a year ago. A Paradigm is a standard, perspective, or set of ideas. A Paradigm is a way of looking at something. I wanted to design a deck that didn’t just look good, but is also mechanically visual and usable! I love this deck because its a crossover deck...a jack of all trades... the best of three worlds. The visual elements of the back design call for some out of mind packet cuts and visuals, whilst the duplicate card and standardized pips, indices, and courts make this a workers dream. Let's not forget about the 3 of hearts reveal! And of course its a perfect gift for that poker player in your life. I'm very passionate about this project as I am all of my endeavors for a few reasons. One because this is my first project and I want it to be more than successful! Also, I feel the Paradigm series can blow up to become the next big name like the Orbits and or Fontaines. 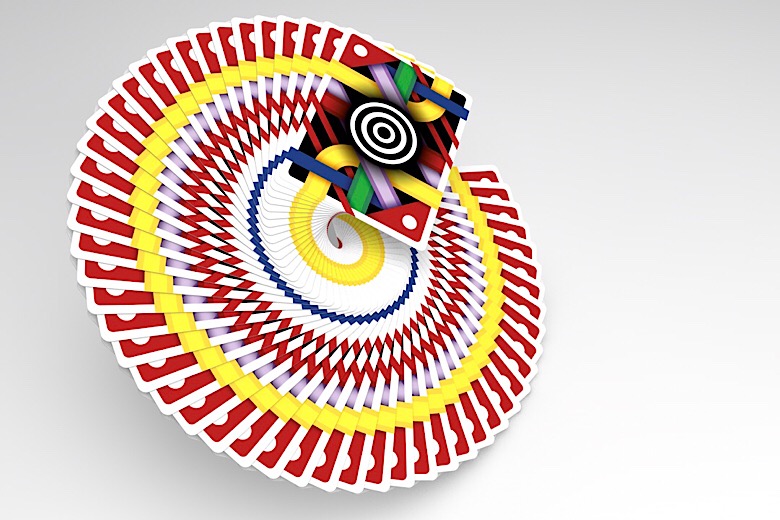 Walk us through the process you took to design this unique deck. How did you come out with the idea and how did you get to this finished product?Since I'm not yet familiarized nor have Adobe Illustrator, I actually hand draw my back designs on blank face cards. It allows me to get a better feel of the actual design in hand right away. I started designing this deck a little over a year ago. A lot of times we see these decks that people put out for the cardistry world that are just either hideous thrown together shapes or designs and or just a deck a famous cardist or magician said is cool so everyone buys it! I wasn’t trying to be part of that crowd. I wanted to put out a deck that made sense in all aspects. Also, we see a lot of separation of categories. People saying decks are specifically for cardistry or saying a deck is only for magic. I wanted to merge the two. I started with the linework, Colors came next.The original concept was only one set of circles in the center which was a yellow and white background. Seeing as I'm also right-handed but use opposite in holding a deck, I wanted to design a deck that looked great flourishing from any angle or hand. I was lucky to have Luke Wadey ask to look at my design to mess with and add some shadowing as well as other subtle changes such as aligning it to perfect grid format. Luke was also pivotal in helping with the tuck design. I wanted an infinite style tuck and he delivered in a huge way and exceeded my expectations. Daniel Schneider as busy as he was also working on a couple other decks, also was crucial in this deck. In my opinion, Daniel is the best when it comes to custom courts. He has proved it every time with his own decks, the Orbit series, and even most recent in the Daniel Madison release. I wanted to only have a handful of custom courts to ensure I kept the deck as standardized as possible. I also wanted to use standard courts but enlarge them a bit to show the details on each card. I did the same with the aces and enlarged all center pips rather than just the Ace of Spades. I tried to keep this deck as standard but different from anything you’ve seen prior. 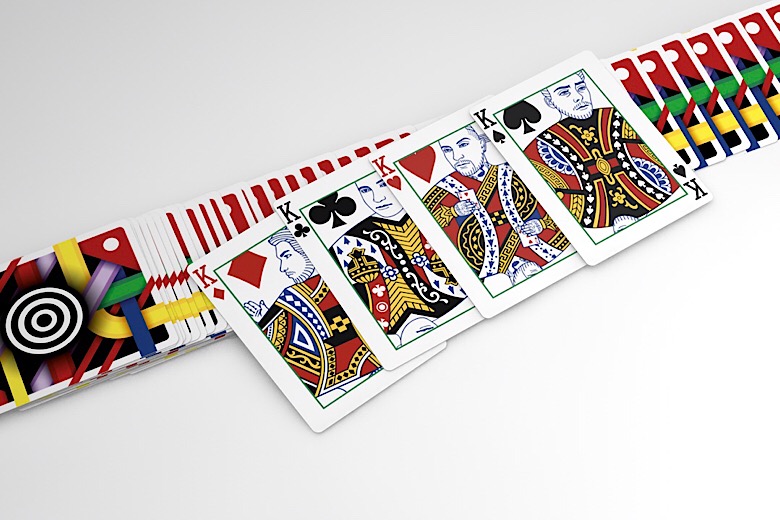 How did you get feedback?I got feedback about the deck from family, friends, Luke and Daniel. I can never say how grateful I am for having two of the best designers play a part in my deck! I might be wrong but I'm almost positive this is the first time 2 big name designers worked together on one deck. At first, I was very scared about it because I didn’t want to be overshadowed on my own deck or have people say or think I didn’t design this and it was all Luke and Daniel! But, after a while, I put my guards down. I also had great feedback from Mahdi Gilbert, Hocus Pocus, Daniel Madison, and a couple others. It's funny because looking back at the original concept of this deck I will say it was not the greatest. But the finished deck is something special.What was your most brilliant breakthrough when designing the deck?There were a few breakthroughs but the most brilliant and key part was the adding and enlarging of the center circles and the heavy shadowing to give the design depth.

What’s next? Can we expect more deck designs in the future?I am working on a couple more designs as we speak. And I have already begun the second edition of the Paradigm deck. I'm hoping to take a page out of the Orbits book and finish with 12 editions of the Paradigm series. As of right now I'm working on getting this worker deck for magicians finished in which I'm going to be printing with Cartamundi on their new E7 stock once it becomes available after the exclusive they have with Ellusionist ends. 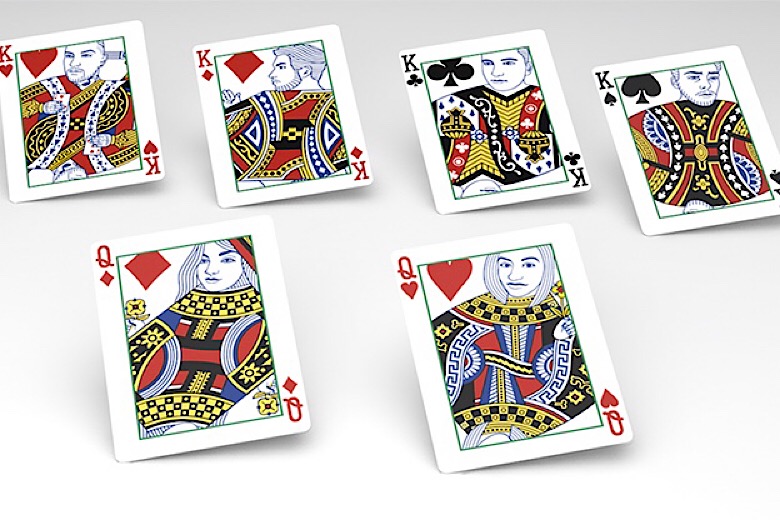 Finally, what are your favorite playing cards? I love standard bicycle decks of course and I have a bunch of sealed and opened blue seal decks from the ’80s and ’90s but my favorite playing cards I have to say are the Red Roses by Daniel Schneider. The black roses series have always been a favorite of mine due to the minimal look and they also resemble standard Rider backs. Red is my favorite color and its the first deck I was ever featured in as the Jack of hearts! I actually have over 100 sealed decks. They will always be my favorite. But my unicorn of decks is the Jerry's Nugget original deck! Never owned or touched one but I hope to one day trade or own one somehow. That's why I'm also excited for the Jerry's reprint by WJPC.Paradigm Playing Card is available NOW from your favorite Murphy's Magic Retailers.